Perhaps not literal fire, but I'm making real progress on a few different things.  I've the toons Rampart and Muckman up on the website in all their graphical glory.  Muckman's not overly special (as far as the costume goes), but I wanted people to see what I generally envisioned for him.  I really like how Rampart's costume turned out.

I'm still waiting on my editors for H.E.R.O. - Dark Research.  I'm hoping that doesn't mean the novel's chock full of typos and grammatical mistakes - although I'm fairly certain they are both simply quite busy.  I'll have it out as soon as they get the results back to me (and make the changes).

That hasn't stopped me from forging ahead on the fifth novel in the series.  It'll be called H.E.R.O. - Horde, and is already nearly 50,000 words in already.  Considering a full novel is about 100,000 words, I'm nearly halfway done, depending on how the story turns out.  Some of the heroes you've barely seen in the other novels get some more face time in this novel.  Some of the notable mutants who aren't simply interested in anarchy begin to appear in the series as well (Lady Nocturne and Lady Celeste, for example).  I'm strongly tempted to do up the graphics on those two.  I'm not certain I have the graphics assets to make Lady Nocturne with her odd mutant parts, but Lady Celeste wouldn't be hard to make, methinks.

On a side note of interest, I hit 300 lbs. on my bench and decline presses recently.  I don't often speak of my weight lifting - I'm a somewhat overweight guy who hits his home gym five times a week and weight lifts hard, mixing in time on the elliptical between every weight lifting set (I like to keep my heart rate as close to or above 150 beats per minute as I can during a workout).  My weakness is food - I love bad food, and someone forgot to install the switch in me that says 'you are now full' that most others seem to have.  I'm not crying about it, however, but simply bringing up a core reason why I hit the gym hard five days a week.

I've added both Zonk and Big Man to the H.E.R.O. page of my website.  Both are bricks, although each also has an unusual power.  Big Man is more of the standard, serious hero of Metrocity.  Zonk is a clownish guy who may not be entirely (at all?) sane.

Both came out generally like I envisioned, especially Zonk - who just looks crazy.

Here's one pic of each, although there are sixteen of each on my main site: 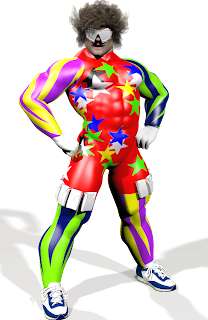 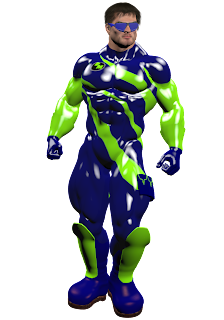 Say hello to Watermane!  This established heroine of Metrocity hangs out near the river district, and literally enjoys walks along the beach.

Sixteen renders of her have been added to http://www.kevinrau.com, along with some general information.

Her data page is http://www.kevinrau.com/HERO/Watermane.asp 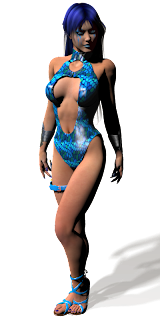 I believe I've finalized the cover for H.E.R.O. - Dark Research.  Here's a tiny pic of it:

I'm breaking from using the gradient backgrounds I did on my previous three covers, but this one seemed to work out fairly well.  I might go with this approach on future novels as well, I guess I'll have to see how the next one turns out.  Razorwing's dark wings work nicely as a backdrop here.  I'm not sure sure it'll work as well with some other character in the background.
This fourth novel in my H.E.R.O. series is in the hands of the editors right now.  With some fortune they'll finish sometime this weekend and I'll be able to get the book out for Kindle and Nook early next week.  (Paperback is always delayed due to the requirement of ordering a proof copy.)
On the Books page of my website (http://www.kevinrau.com) the cover is clickable to view a larger version of the above.
'Til next time....
--Kev
Posted by Kevin Rau at Friday, November 04, 2011 No comments: